U.S. Puts Iran on Notice and Weighs Response to Attack on Oil Tankers

WASHINGTON — The Trump administration began an urgent debate on Friday over how to respond to what officials say has grown into a shadow war with Iran, after attacks on oil tankers in the Persian Gulf that appeared meant to assert Iranian control over one of the world’s most strategic shipping lanes at a time of heightened tension with the United States.

President Trump put Iran on notice that the United States would push back but offered no details and suggested that he was ready to engage with the Iranians, who denied responsibility for the attacks, whenever they are prepared to talk.

But tension remained high, with a senior official confirming that Iran had fired a surface-to-air missile on Thursday at an American drone flying over the Gulf of Oman, where the attacks on the tankers occurred. The episode took place early that morning, between the distress calls from the two ships crippled by explosions that day.

Officials at the Pentagon weighed tactical responses to the attacks, like beefing up the security around tankers, or more drastic moves, like deploying as many as 6,000 additional Navy, Air Force and Army personnel to the Persian Gulf.

One of the two tankers hit by the explosions on Thursday, the Japanese-owned Kokuka Courageous, was being towed into a port in the United Arab Emirates for further inspection into how the attack was carried out and with what kind of weapon. The Navy dispatched a bomb squad team to investigate.

The other tanker, the Norwegian-owned Front Altair, remained adrift, on fire and abandoned by its crew after Iranian patrol boats chased off civilian tugs that had come to tow it to port.

Mr. Trump, citing a grainy, black-and-white American military video of a small boat filled with sailors at the side of one of the stricken tankers, declared that there was no doubt that Iran was behind the attacks. One of the mines, he said, had “Iran written all over it.”

But others said the footage fell short of proving Iran’s culpability.

Germany’s foreign minister said the video was “not enough” to determine conclusively that Iran had carried out the attacks, a position echoed by Norway’s government, and the European Union cautioned against further escalation. The Japanese owner of the Courageous questioned accounts that the ship had been damaged by a mine or mines, saying it had been struck by a flying object. 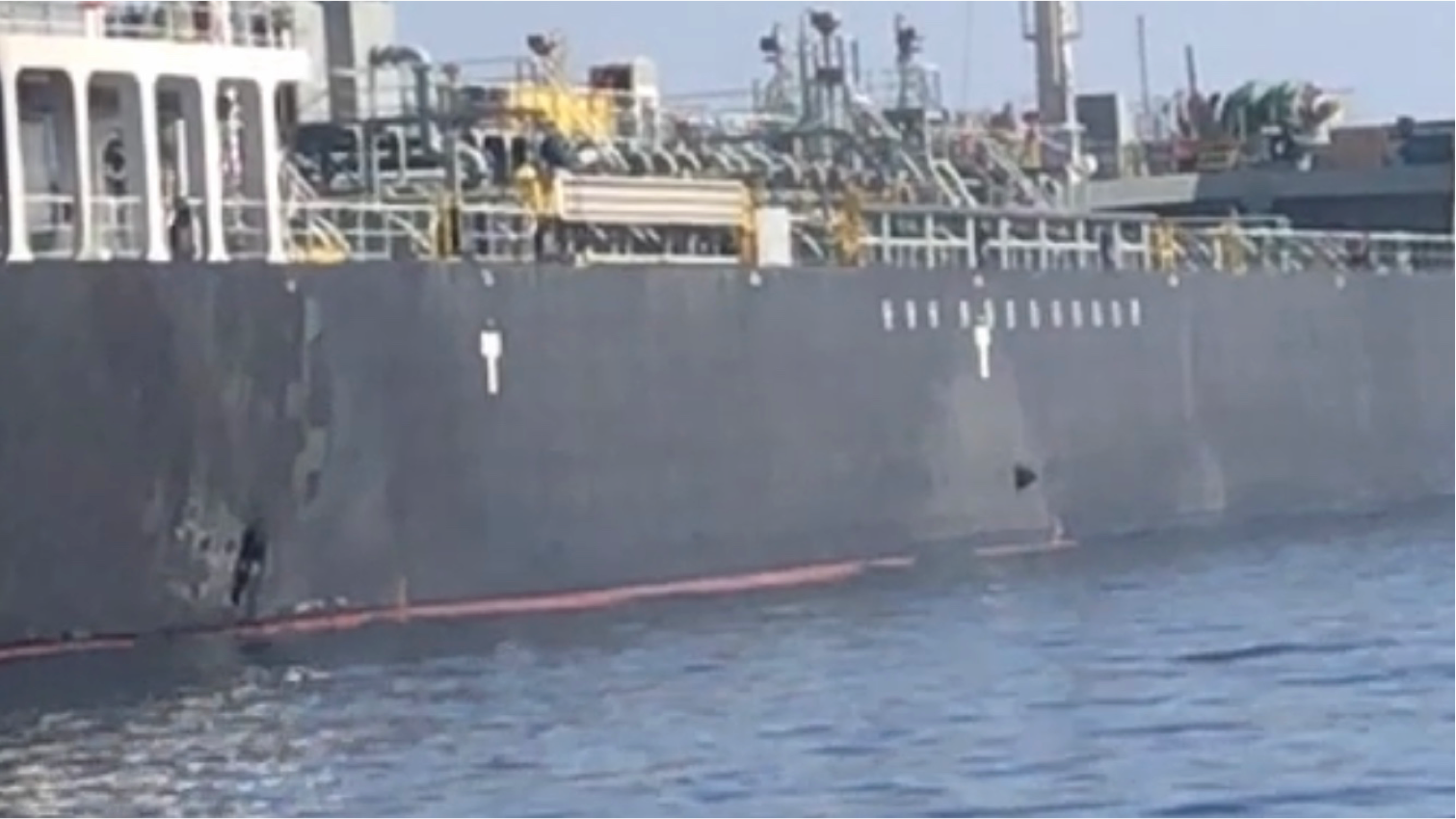 A Times analysis of video released by the U.S. Defense Department indicates that an Iranian patrol boat removed an object from the hull of a stricken tanker in the Gulf of Oman on June 13. The object may have been a limpet mine.CreditCreditU.S. Dept. of Defense

Their skepticism reflected a deeper distrust of an American administration that has pulled out of the Iran nuclear deal, spurning its European allies and sowing suspicion that the United States is spoiling for a fight with Iran.

With the flurry of questions about Iran’s motives and the United States’ intelligence, even the president appeared to be treading carefully. While he said the United States would not allow Iran to shut down the Strait of Hormuz, a key transit point for oil shipments, Mr. Trump insisted he was not looking for war. He even reopened the door to some kind of engagement with the Iranian leadership.

“I’m ready when they are,” Mr. Trump said in a telephone interview on Friday with “Fox & Friends,” the Fox News morning program. “Whenever they’re ready, it’s O.K. In the meantime, I’m in no rush.”

Mr. Trump’s remarks were more cautious than those of Secretary of State Mike Pompeo a day earlier, and they captured a tension in the administration. The president has signaled a desire to reduce American involvement in wars and engage in diplomacy even as he has taken aggressive positions in confronting rivals like Iran. His more hard-line advisers, including Mr. Pompeo and the national security adviser, John R. Bolton, are pushing for the United States to tighten the pressure.

Iran accused the United States and its allies, including Israel, Saudi Arabia, and the United Arab Emirates, of seizing on the attacks to “sabotage diplomacy” as it waged economic warfare on the country. Iran’s foreign minister, Mohammed Javad Zarif, said on Friday on Twitter that the United States accused Iran without “a shred of factual or circumstantial evidence.”

“There’s no one else in the region that really attacks ships in the water — it’s not an easy thing to do,” Vice Adm. Kevin M. Donegan, a former Fifth Fleet commander, said in a telephone interview.

Mr. Pompeo said on Thursday that any perpetrator would have needed a high level of expertise to carry out the attacks. Yet the video depicts a curiously haphazard operation, with an ill-advised placement of the mine on the ship, careless safety procedures to remove it and little effort to hide the activity.

Rather than simply being incompetent, some officials said the operation to remove the mine could have been intended to be seen by the United States and its allies. As the hybrid warfare carried out by Russia in Ukraine, they said, actions by Iran are meant to be disguised enough to delay an international response but ultimately leave little doubt about what it is trying to accomplish.

American intelligence agencies believe Iran wants to use covert attacks on shipping to drive up the price of oil. That is aimed at hurting Mr. Trump, who has tweeted about high oil prices. Iran’s own oil exports are under pressure by American sanctions, and Tehran is hoping to squeeze as much money out of the limited crude it can sell, a goal that would be advanced if oil prices are driven higher by uncertainty about shipments through the gulf.

Oil prices rose briefly after Thursday’s attacks, although trade tensions with China continue to pressure prices downward. Over time, analysts said, Iran may be trying to push up prices by raising insurance premiums on tankers in making their voyages more treacherous.

While Iran would be at a substantial disadvantage in a full-scale war with the United States, adversaries over the last two decades have shown how the United States struggles with opponents who wage unconventional “shadow wars,” where the definition of victory is not clear and the traditional rules of war do not apply.

This week’s attacks were a step beyond the sabotage of four other tankers in May. They caused greater damage to the vessels and forced the crew of one to abandon ship. The strikes, according to analysts and former officials, appeared meant to demonstrate Iran’s regional strength to Saudi Arabia and other American allies, but still stop short of an American military reprisal.

“They don’t want to do something that would provoke a response that could end their regime,” said Daniel Hoffman, a former C.I.A. officer and Middle East department chief. “They know a war is regime suicide, so they won’t reach a tipping point of an attack that would do so much damage that the U.S. would respond with a large amount of force.”

At the Pentagon, officials are weighing a proposal from the military’s Central Command to send as many as 6,000 forces to the gulf region, including two additional fighter squadrons, additional Navy destroyers and submarines and several Patriot antimissile batteries. The reinforcements are part of a larger request for nearly 20,000 troops that commanders in the region initially proposed last month.

The acting defense secretary Patrick Shanahan and Gen. Joseph F. Dunford Jr. pared down that original request, fearing that the president would reject it and the Iranians would view it as unduly provocative. Mr. Trump eventually ordered about 1,500 additional troops to the Middle East, most of whom have already arrived.

But the Pentagon kept the door open to send more forces if the new commander of the Central Command, Gen. Kenneth F. McKenzie, made the case that they were necessary. The attacks on the two tankers Thursday gave the general just that rationale, two senior American officials said on Friday.

“We’re making sure that General McKenzie and the Central Command has the resources and the support that they need to conduct their missions,” Mr. Shanahan told reporters on Friday at the Pentagon. He also spoke of the need to broaden support and “to develop international consensus.”

Bolstering security around tankers passing through the Strait of Hormuz is another option to respond to the attacks, according to American diplomats. An international warning to Iran or its proxy forces that any small boat approaching a tanker could be subject to military action could help deter attacks.

But making such a warning credible is likely to require a broad international coalition. Even if additional forces are sent, the United States alone does not have enough ships to enforce what would amount to a security cordon around all tanker traffic.

On Friday, Jonathan Cohen, the acting American ambassador to the United Nations, discussed the situation with Iran with members of the Security Council.

Diplomats said an international antipiracy mission off the coast of Somalia could be a model for the Persian Gulf and the Gulf or Oman, where the attacks occurred. Winning Chinese support for such an operation would be vital, according to some American diplomats. In the past, the People’s Liberation Army Navy has taken part in antipiracy operations, including off the coast of Somalia.

The United States, however, faces steep hurdles in persuading a skeptical international community. Some in Europe believe that the administration’s disavowal of the nuclear deal, brokered by President Barack Obama, is responsible for recent tension. They are also wary that any American accusation against Iran is meant to drive the West toward war.

Some lawmakers said they were concerned that American officials could be misreading the motivations of their Iranian counterparts. Iran could be reacting to the tougher sanctions and other threatening measures taken by the administration, which has sent conflicting signals on its ultimate goals, the lawmakers said.

“I think the administration is responding to increased threats,” said Representative Elissa Slotkin, Democrat of Michigan, a former C.I.A. analyst and Pentagon official who worked in Iraq and has studied Iranian-backed militias. “But you can’t tell what is defensive what is offensive. Are we in a cycle of escalation that we had a heavy hand in starting?”