MOSCOW — Months before a whistle-blower’s complaint came to light this week, raising alarms over dealings between the Trump administration and Ukraine, the issue was roiling politics in Kiev.

The whistle-blower’s specific allegations remain cloaked in mystery, but they involve at least one instance of President Trump making an unspecified commitment to a foreign leader along with other actions, according to news reports in Washington. At least part of the allegation deals with Ukraine, the reports say.

But for months now in Kiev, the Ukrainian capital, the government of the neophyte president, Volodymyr Zelensky, has been grappling with unwelcome political pressure by associates of Mr. Trump. Rudolph W. Giuliani, Mr. Trump’s personal lawyer, said in an interview Thursday night on CNN that he had pressed Ukrainian officials to pursue investigations into Mr. Trump’s political opponents, including former Vice President Joseph R. Biden Jr. and his family.

Mr. Zelensky took office in May, but even before then, Mr. Giuliani has said he sought a meeting with the president to investigate a natural gas company, Burisma, where Mr. Biden’s son, Hunter Biden, had served on the board of directors.

Mr. Zelensky’s transition team, not wanting to be seen as taking sides in United States politics, rebuffed the request, a former adviser to Mr. Zelensky, Serhiy Leshchenko, said in an interview.

“It was clear that the Zelensky team doesn’t want to interfere in American politics,” Mr. Leshchenko said. “They were very angry about this issue.”

Mr. Leshchenko and two other Ukrainians, all of them young, Western-leaning politicians and veterans of the 2014 revolution, said in interviews that Mr. Giuliani’s efforts created the impression that the Trump administration’s willingness to back Mr. Zelensky was linked to his government’s readiness to pursue the investigations sought by Mr. Trump’s allies.

When it became clear that he would not be granted an audience with the incoming Ukrainian president, Mr. Giuliani asserted in an interview on Fox News that Mr. Zelensky was being advised by “people who are the enemies” of Mr. Trump, including Mr. Leshchenko.

Mr. Giuliani seemed to be referring to Mr. Leshchenko’s role in helping to draw attention to reports about the “black ledger” book that detailed $12.7 million in off-the-books payments to Paul J. Manafort, the former Trump campaign chairman, who did extensive work in Ukraine for Viktor F. Yanukovych, the disgraced former president. 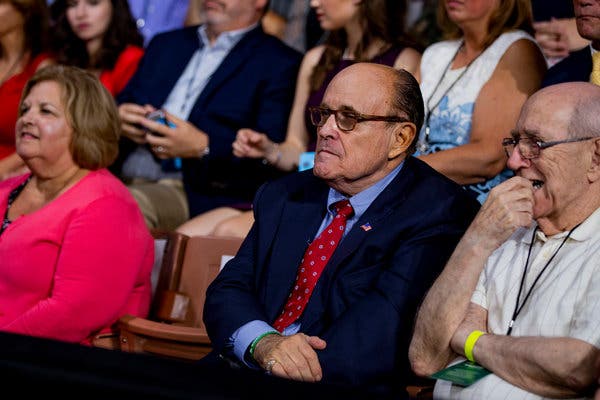 After Mr. Giuliani’s appearance on Fox News, the incoming chief of staff for Mr. Zelensky told Mr. Leshchenko he would not be considered for a position in the new government, Mr. Leshchenko said.

Ukrainian officials and intermediaries in touch with the Ukrainian government and Mr. Giuliani tried to find some way to mollify Mr. Giuliani and the Trump administration with an informal meeting or a phone call, Mr. Leshchenko said, but Mr. Zelensky vetoed all their proposals.

Eventually, a State Department official, Kurt D. Volker, the American envoy to settlement talks in the Ukraine war, arranged a meeting between Mr. Giuliani and a senior Ukrainian official in Madrid where the investigations were discussed.

The two presidents spoke by phone on July 25. In the call, Mr. Trump told Mr. Zelensky that Ukraine could improve its reputation and “interaction” with the United States by investigating corruption, according to a Ukrainian government summary.

It is not clear whether Mr. Trump specifically linked United States aid to Ukraine to political help in next year’s election in the United States by investigating his political opponents. Several weeks after the call it was reported that the Trump administration had put a hold on $250 million in Pentagon funding.

“For me, it’s crystal clear” that the Trump administration was seeking to trade military aid for Ukraine’s war against Russian-backed separatists for political favors, Daria M. Kaleniuk, the executive director of the Anti-Corruption Action Center in Kiev, said in an interview.

The hold on the aid was lifted on Sept. 12, after three congressional committees opened investigations into whether the Trump administration had misappropriated foreign policy tools to try to help the president politically. Those investigations were started in response to reporting on Mr. Giuliani’s activities in Ukraine.

Much was at stake in the delayed military assistance. More than 13,000 people, most of them civilians, have been killed in Ukraine’s five-year war with Russian-backed separatists, Europe’s only active military conflict.

Mr. Trump has suggested he would like Attorney General William P. Barr to look into material gathered by the Ukrainian prosecutors. But under a bilateral legal assistance agreement, American law enforcement can only ask for evidence if a criminal investigation is underway in the United States, which is not the case.

“It is a very unfortunate situation for Zelensky,” Svitlana Zalishchuk, a former member of the foreign affairs committee in Ukraine’s Parliament, said in a telephone interview. “Obviously, he wants to build good relations with the American administration. At the same time, he doesn’t want to play American politics.”