A pair of U.S. Marines and their friends heading back from a road trip last week made a pit stop to save an Oregon man’s burning home during the state’s deadly wildfires.

The group was driving through what they described as “hell” near Estacada, Ore., on Labor Day, Sept. 7, when they spotted firefighters battling a fire. Video posted online shows at least one of the group members — wearing shorts — holding a sprinkler within feet of the blaze.

“The smoke’s in my eye!” he is heard shouting.

“Get that whole bush wet!” another person yells.

Others lend a hand by supplying buckets of water and at least one person jumps a fence, according to the video.

Louie Bec, one of the Marines in the video, said he noticed the large fires and just wanted to help.

“We saw a fire approaching a man’s house and firefighters were fighting another fire so we helped him,” he told Storyful. “I didn’t want to see that guy’s house go down.”

The official Twitter account of the U.S. Marine Corps appeared to get word out about their actions Wednesday night, posting the caption: “Facing Fire.”

“As the wildfires blaze across the West Coast, two off-duty Marines sprang into action to help an Oregon man who found his home in the path of destruction,” the Marine Corps wrote.

Users on Twitter responded to the post, thanking the Marines for putting their lives at risk in order to help local residents.

“US Marines are awesome.” another wrote.

Estacada — a city of about 3,700 residents in Clackamas County, about 30 miles southeast of Portland — was under a Level 2 evacuation order Wednesday night as crews continued to fight the Riverside Fire and other blazes in the area.

Level 2 means a significant danger exists, and residents are advised to relocate to a shelter outside the affected area, or “be ready to evacuate at a moment’s notice,” according to the State of Oregon. 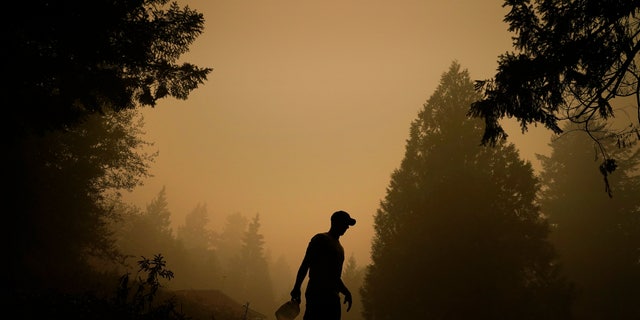 Aaron Cleys holds a jug of water he was using to douse hot spots at a home destroyed by the Riverside Fire, Friday, Sept. 11, 2020, in Estacada, Ore. (Associated Press)

A Level 3 evacuation had been issued in the area Sept. 8, just one day after the group fought blazes in the city, according to Clackamas County’s Twitter account.

After putting their lives at risk, Bec added: “I don’t think anyone would have done anything different.”