Vivant Smart Home Arena in Salt Lake City was evacuated Friday night after a suspicious shoebox was found underneath a table in an arena restaurant, according to reports.

The discovery came just minutes after the Utah Jazz defeated the Golden State Warriors 113-109 in an NBA game.

Players still in uniform left the building with the crowd, without even going to their locker rooms. Most of the spectators had already exited before the evacuation started.

“We don’t know if it’s anything explosive. So far what we have is just a suspicious package,” Salt Lake City Police Department Lt. Carlos Valencia told reporters after the evacuation. “Public safety is paramount to us and we take these complaints very seriously.” 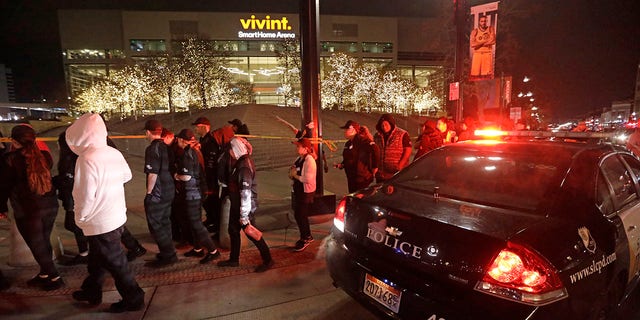 A police bomb squad was called in after a bomb-sniffing dog reacted to the shoebox, Valencia said.

Salt Lake City police said the package turned out to be a toolbox and the teams were allowed to return to the building about two hours later, the Jazz said.

No injuries were reported.

Separately, about 25 minutes after the evacuation, three people were wounded in a drive-by shooting outside a concert venue called The Complex just two blocks away, The Salt Lake City Tribune reported. Valencia said one of the victims was shot in the chest but was expected to survive. No arrests were reported as of early Sunday.