The emergency personnel trying to keep people safe from devastating wildfires raging across parts of the Western United States are facing another hurdle, according to disaster relief personnel.

In Oregon, looters and thieves are having a damaging ripple effect as residents try to evacuate from active fire fronts and law enforcement staffing is already on short supply.

With more than half a million people forced to vacate their properties, the state is seen to be especially vulnerable. On Sunday, two men were arrested in Oregon for looting in an abandoned hot zone.

The situation has moved local residents to begin posting signs bearing slogans like: “You loot, we shoot.” 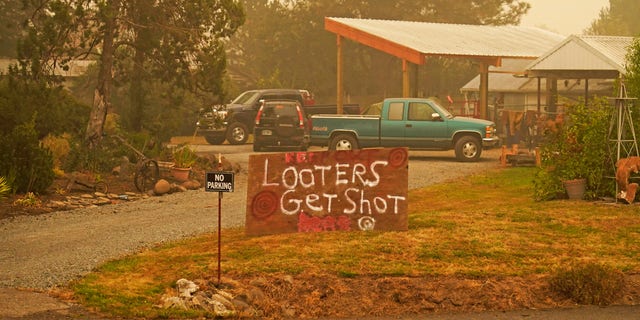 A sign warns that “Looters get shot” at a home near the Riverside Fire, Sunday, Sept. 13, 2020, near Molalla, Ore. (AP Photo/John Locher)

“Criminals are also making bogus 911 calls to divert patrols away from evacuated neighborhoods,” the insider, who was not authorized to speak on the record, told Fox News. “Now we are seeing armed homeowners and civilians coming back into evacuated areas and trying to enforce the law in their own hands.”

Residents have established their own checkpoints and are said to be stopping “unfamiliar” vehicles, which have also garnered pushback from authorities who have condemned the action as illegal. 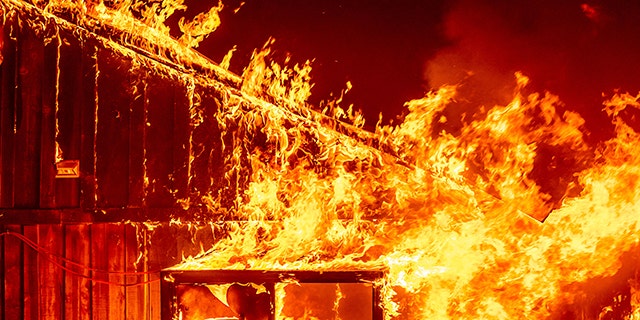 Flames shoot from a home as the Bear Fire burns through the Berry Creek area of Butte County, Calif., on Wednesday, Sept. 9, 2020. The blaze, part of the lightning-sparked North Complex, expanded at a critical rate of spread as winds buffeted the region. (AP Photo/Noah Berger)

Meanwhile, Clackamas County Sheriff Craig Roberts told reporters earlier this week that his agency has responded to more than 330 calls for service over the past week – a 400% increase from the previous week.

“We have a group of different individuals that are actually trying to protect property. They actually have been armed and are stopping individuals within the commune out there,” Roberts said. “First thing I’d ask them to do is please stop that. We have reached out to a number of them. If they see somebody suspicious, call us. Let us handle it. It is illegal to stop somebody at gunpoint.”

Looting concerns have also plagued neighboring California. As three severe fires gnawed through the state’s Scotts Valley region, law enforcement bemoaned that many were not heeding vacation mandates as “absolutely soulless” opportunists were capitalizing on the calamity to steal. 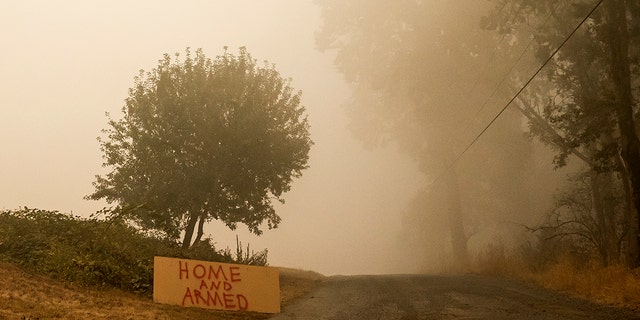 SUBLIMITY, OR – SEPTEMBER 13: A sign warns against looters as heavy smoke fills the air on September 13, 2020 in Sublimity, Oregon. Multiple wildfires grew by hundreds of thousands of acres this week forcing evacuations and road closures. (Photo by Nathan Howard/Getty Images)

Even a fire commander had his personal items taken while he was busy fanning flames – and subsequently saw his bank account swiftly drained.

In less than a month, the deadly fires have torn through more than 5 million acres across the three Western states, consumed some 4,000 homes, and claimed the lives of at least 35 people – with dozens still missing.

And for many parts of the burning West, the peak of the fire season is yet to come – raising concerns that criminals will only continue to exploit the burgeoning disaster.

Investigators have a long road ahead in weaving together all the pieces of the causation puzzle – with experts emphasizing that the devastation derives from a multitude of factors, natural or otherwise.