‘Where Is Kevin?’ McCarthy Finds a Place in the Trump Camp 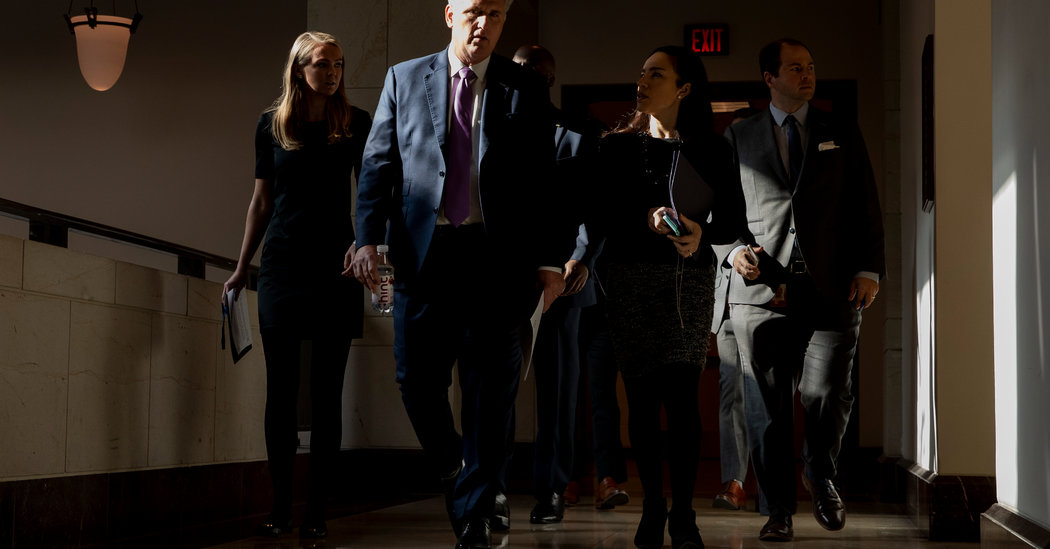 WASHINGTON — Representative Kevin McCarthy of California, the House Republican leader, hails from an era — four years ago — when gaffes could cost a lawmaker a job. In 2015 he lost his shot at the speaker’s gavel after he said the quiet part out loud: The true purpose of Republicans’ two-year inquiry into a deadly 2012 attack on the diplomatic compound in Benghazi, Libya, was to dent Hillary Clinton’s poll numbers.

But in these times, when such impolitic truths are uttered often by the commander in chief, Mr. McCarthy has found a moment. He stayed on as the House Republicans’ No. 2 after failing to grab the speakership, rising to the conference’s top spot last year after Paul D. Ryan retired amid the anti-Trump wave of 2018, which handed the speaker’s gavel to Nancy Pelosi.

Unburdened by Mr. Ryan’s strong ideologies or the self-certainty of a Newt Gingrich, Mr. McCarthy has become the happy warrior of the age, one colleague said, posing for photographs with players in the Ukraine saga, like Lev Parnas, shouting encouragement to his compatriots from his leadership perch and shepherding a fractious Republican conference behind President Trump, wrecker of Republican tradition.

“Congress no longer operates as an independent branch of government, but as an appendage of the executive branch,” said Tom Davis, a former Republican House member from Virginia. “He is made for that role.”

In recent weeks, Mr. McCarthy has called House impeachment “a national nightmare,” “rigged” and a “last attempt to stop the Trump presidency.” He claimed the F.B.I. “broke into” Mr. Trump’s campaign in a “modern-day Watergate.” He suggested that former Vice President Joseph R. Biden Jr. should suspend campaigning while many of his top rivals for the Democratic presidential nomination, Senators Bernie Sanders of Vermont, Elizabeth Warren of Massachusetts and Amy Klobuchar of Minnesota, sit as captive jurors in the impeachment trial.

His delivery lacks the razor edge of his fellow House Republican leader Liz Cheney, who announced on Thursday that she would forgo a campaign for Wyoming’s open Senate seat to remain in the House, a veiled threat to challenge Mr. McCarthy for the speakership if Republicans regain the majority. He never attains the volume of Representative Jim Jordan of Ohio, who has challenged him for Republican leadership posts, or the umbrage of Representative Devin Nunes, a Republican from the California district next door.

Five minutes later, Mr. Massie texted an additional thought: “I can say this about Kevin, he’s been far more helpful to the president than Paul Ryan would have ever been during this impeachment sham.”

For now, that may be his main job: making the president happy.

“Where is Kevin McCarthy, the great Kevin McCarthy?” Mr. Trump demanded last week at a China trade event at the White House. When it was clear the minority leader was in the House, preparing for the vote to send articles of impeachment to the Senate, the president added: “Kevin McCarthy, as you know, left for the hoax. Well, we have to do that; otherwise, it becomes a more serious hoax.”

Representative Peter T. King, Republican of New York, said House Republicans had gained confidence in their leader since he flubbed the speakership and forced leaders to dragoon Mr. Ryan into action.

“I can’t see him making that Hillary Clinton mistake again,” Mr. King said. “He’s able to get his point across without damaging the party.”

“It’s really brutal warfare right now, and any sign of seeming too reasonable or conciliatory could scare off the Republican base and be looked upon as weakness by the Democrats,” he continued. “These aren’t normal times. Today, if you make a deal you’re a sellout.”

Representative Tom Cole, Republican of Oklahoma, noted, “We need to have a productive relationship with the president.”

The impeachment saga has, however, most likely tainted Mr. McCarthy. Late last year, his awkward defense of the president in the Ukraine affair on “60 Minutes” — he appeared unfamiliar with the rough transcript of Mr. Trump’s now-infamous call with President Volodymyr Zelensky of Ukraine — prompted Representative Justin Amash of Michigan, who left the Republican Party last year over the president’s conduct, to tweet, “Kevin McCarthy again displays his unique brand of incompetence and dishonesty.”

Photographs have trickled out in recent days showing the minority leader hobnobbing with characters central to Mr. Trump’s effort to enlist Ukraine in discrediting Mr. Biden. Those include Mr. Parnas, an associate of the president’s personal lawyer Rudolph W. Giuliani, and Robert F. Hyde, a Republican congressional candidate who suggested in encrypted messages to Mr. Parnas that he was secretly tracking the United States ambassador to Ukraine at the time, Marie L. Yovanovitch.

Ms. Pelosi could not resist taking a dig at Mr. McCarthy on the House floor last week when she referred to “new evidence, pursuant to a House subpoena, from Lev Parnas — recently photographed with the Republican leader.”

On Thursday, Mr. McCarthy could not hide his frustration with a reporter, Adam Klasfeld of Courthouse News, when he asked the leader to explain exactly what he had done with Mr. Parnas’s campaign contributions, a question Mr. McCarthy said the reporter asks “every week.”

“I do events every single day, and I do pictures with thousands of people all the time,” he said during one of his exchanges with Mr. Klasfeld, adding that he donated Mr. Parnas’s contributions “to charity.” He has repeatedly declined to say which ones.

Asked whether Mr. McCarthy would agree to be interviewed for this article, his spokesman, Matt Sparks, said, “I’m trying to figure out what he could say that might be interesting.”

That was a question on the mind of some of his political opponents. After Mr. McCarthy suggested that the impeachment trial was a way for establishment Democrats to hurt Mr. Sanders’s presidential campaign, Ms. Pelosi’s deputy chief of staff, Drew Hammill, wrote on Twitter, “As usual, the Minority Leader has no idea what he’s talking about.”

Charlie Dent, a former Republican House member from Pennsylvania, suggested the unsolicited advice to the Democrats was a way to damage Mr. Biden. “This is Kevin McCarthy’s way of invading the Democratic primary, and helping the president,” he said. “That’s why he’s wandered into this minefield.”

Beneath the bravado, Mr. McCarthy may be feeling the walls closing in on him. After Republicans’ 2018 midterm shellacking, he is one of only a half-dozen Republicans left in California’s 53-member House delegation. There were 19 elected in 2006, when he first won his seat.

He must protect his right flank from a restive Freedom Caucus, which counts as one of its founders Mr. Jordan, a ferocious Trump acolyte who helped derail Mr. McCarthy’s bid for the speakership in 2015. Last week, the minority leader’s confines grew even cozier with Ms. Cheney’s political decision.

All this, plus Mr. McCarthy must retain favor with the mercurial Mr. Trump, who makes his displeasure with recalcitrant Republican lawmakers known in ways that have cost them their jobs.

The son of a firefighter, Mr. McCarthy, 54, hails from a solidly Republican, middle-class district in California’s agricultural interior. He was initially skeptical of Mr. Trump: He once suggested that the president-to-be was on the payroll of President Vladimir V. Putin of Russia.

But as Mr. Trump tightened his grip on the party’s base, Mr. McCarthy wooed him with gestures large and small. During the 2016 campaign, he played mediator with outraged Republicans after Mr. Trump was heard bragging about sexual assault on an “Access Hollywood” tape. He issued a statement heralding “a new period in our country’s great history” after Mr. Trump’s “American carnage” inauguration speech. He threw a big party at the Trump International Hotel (Mr. Trump did not show up, despite high hopes) and he sent a handpicked supply of Mr. Trump’s favorite cherry and strawberry Starburst candies to the White House.

In 2010, Mr. McCarthy, Mr. Ryan and Representative Eric Cantor of Virginia were hailed as the young, hip, fit future of their party. In their book, “Young Guns: A New Generation of Conservative Leaders,” they portrayed themselves as “reform-minded Republicans” who were “eager to erase the image of congressional Republicans as big spenders preoccupied with assuring their own re-election.”

Today, Mr. Cantor and Mr. Ryan are gone, along with many of their small-government, free-market, pro-trade ideals, replaced by Mr. Trump’s crackdown on immigrants, his protectionist tariffs, and tax cut and spending deals that have ballooned the federal deficit. Used copies of “Young Guns” sell on Amazon for 10 cents, and Mr. McCarthy is very much focused on his conference’s re-election campaigns, hopping from fund-raiser to fund-raiser late into the night.

“The difference between Eric and Paul and Kevin is that Kevin really likes politics,” Mr. Feehery said. “He’s not particularly ideological, he likes to backslap with his colleagues, and he likes to get around and raise money.”

If the Young Guns’ personalities represented parts of a meal, Mr. Franc said, Mr. Ryan would be “vegetables” and Mr. Cantor “good fish.” Mr. McCarthy, he said, “is the maître d’.”