White House Is Pressing for Additional Options, Including in Cyberspace, to Deter Iranian Attacks 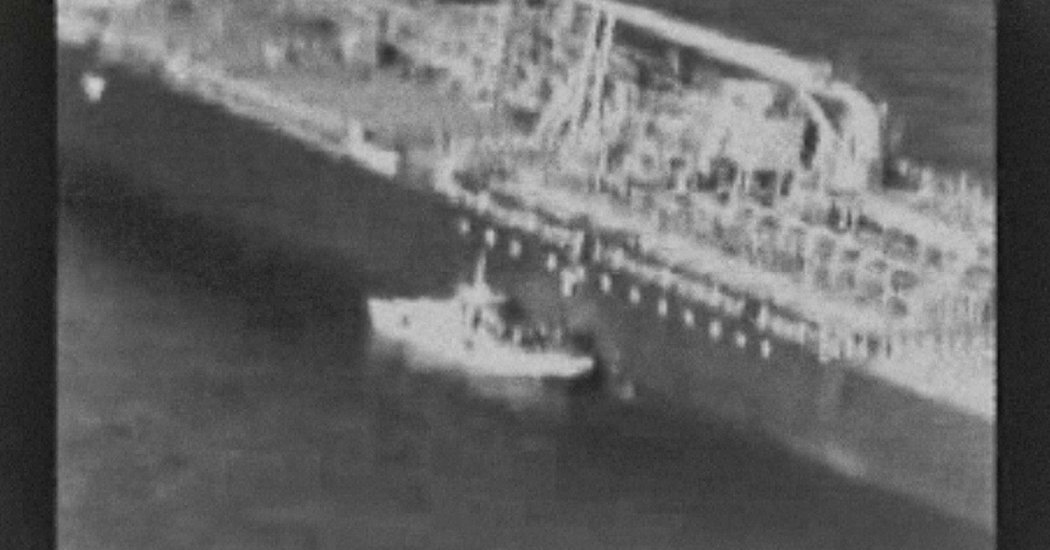 WASHINGTON — American intelligence and military officers are working on additional clandestine plans to counter Iranian aggression in the Persian Gulf, pushed by the White House to develop new options that could help deter Tehran without escalating tensions into a full-out conventional war, according to current and former officials.

The goal is to develop operations similar to the cyberattacks conducted on Thursday and that echo the shadow war the United States has accused Tehran of carrying out with attacks on oil tankers in the Middle East, according to American officials briefed on the effort. Iran maintains that it was not responsible for the attacks on the tankers.

The cyberattacks were aimed at an Iranian intelligence group that American officials believe was behind a series of attacks on tankers in the Persian Gulf region. The American operation was intended to take down the computers and networks used by the intelligence group, at least temporarily. A separate online operation was aimed at taking out computers that control Iranian missile launches.

The White House has told military and intelligence officials it wants options in line with the kind of operations conducted by Iran’s Islamic Revolutionary Guards Corps, the officials said.

President Trump has made clear he believes that, at this point, a direct strike would be escalatory, although he has repeatedlywarned Iran against further aggression.

Intelligence and military officials have told White House policymakers, including Mr. Trump, that without an additional American response, Iran will continue to destabilize the region.

Officials did not provide specifics about the secret operations under consideration by the White House. But they could include a wide range of activities such as additional cyberattacks, clandestine operations aimed at disabling boats used by Iranians to conduct shipping attacks and covert operations inside Iran aimed at fomenting more unrest. The United States might also look for ways to divide or undermine the effectiveness of Iranian proxy groups.

The C.I.A. has longstanding secret plans for responding to Iranian provocations. Senior officials have discussed with the White House options for expanded covert operations by the agency, as well as plans to step up existing efforts to counter Iran’s efforts, according to current and former officials.

One former American military commander said there were a range of options that the Pentagon and the C.I.A. can pursue that could keep Iran off balance but that would not have “crystal-clear attribution” to the United States. An American operation that was not publicly announced could still deter further action by Tehran, if Iran understood what United States operatives had done, the former officer said.

The types of responses the United States could undertake are broad if the United States was willing to use the same tactics that Iran has mastered, said Sean McFate, a professor at the National Defense University and the author of “The New Rules of War.”

“If we want to fight back, do it in the shadows,” he said.

Mr. McFate said the United States could put a bounty on Iran’s paramilitary and proxy forces. That would create an incentive for mercenary forces to take on Hezbollah and other Iranian proxies. American intelligence forces also could find new ways to assist existing protests against the Iranian government. Such efforts could include spreading information, either embarrassing truths or deliberate false rumors, aimed at undermining the support that Tehran’s elites have for Iran’s leaders, he said. The United States could also look at ways to make protests by Iran’s labor movement more effective at weakening the government.

Current and former officials say that Iran’s covert attacks against shipping and its downing of an American drone are an attempt to try to raise pressure on the United States. Iran, they say, hopes that by sowing chaos in the Persian Gulf it can drive up oil prices, which will put pressure on both Mr. Trump and American allies dependent on Middle Eastern oil. Iran maintains that the drone it shot down had violated its airspace, while American officials insist it had been over international waters.

“From the Iranian perspective, unconventional attacks, threats against Gulf shipping and air routes and bellicose rhetoric represent the best ways to pressure the international community to compel the U.S. to relieve sanctions without igniting a conventional conflict,” said Norman T. Roule, a former national intelligence manager for Iran and a C.I.A. Middle East expert.

While a number of senior American national security officials agree that further action against Iran is needed, they are divided about how public that action needs to be.

Some officials believe the United States needs be willing to master the kind of deniable, shadowy techniques Tehran has perfected in order to halt Iran’s aggressions. Others think that, while helpful, such clandestine attacks will not be enough to reassure American allies or deter Iran.

Iran will most likely for a time pause its activities, said senior American officials. But, with sanctions biting, they say Iran will once again resume attacks on shipping. That will once more force the White House to consider a direct military strike.

While so-called gray zone operations are meant to stay below the threshold of inciting open conflict, the moves always run the risk of touching off exactly what both sides are trying to avoid: a shooting war.

Moreover, some online operations are far easier than others. Knocking an intelligence agency’s computers offline, as the United States did with Russia last year during the midterm American elections, is fairly basic. But getting inside a missile launch operation is much harder; while the United States succeeded in doing so in North Korea, it took a long time and prompted the North Koreans to build an entirely different missile system.

The Iranians also now have much greater capability to strike back in the cyber realm than they did a decade ago. Their foray into American banks in 2012 and 2013 was, in retrospect, a training exercise. When the Department of Homeland Security issued a warning on Saturday about Iranian cyberthreats, it described much greater capabilities. Iran’s “cyber corps” has now had years of training in causing damaging attacks, like the one it conducted on a Las Vegas casino and other targets in the United States.

Mr. Roule also agreed the United States response needs to be public and clear. “The best U.S. options will not be covert,” he said. “Overt options send the strongest message of deterrence. Iran needs to know that the U.S. — supported by the international community — will not tolerate its behavior.”

Mr. Trump has been stung by criticism about his decision to call off the strikes following the Iranian drone attack. But the president believes a combination of covert operations by the C.I.A. and clandestine operations by the military’s Cyber Command and other military forces will demonstrate his resolve as commander in chief, a senior administration official said.

The president is eager to avoid a messy shooting war with Iran, which he believes would violate his campaign promise to keep America out of protracted conflicts in the Middle East. A shadow war would reduce the exposure of American troops and, if Iran was unsure of whether the United States or its allies were responsible, its response could be muted.

Authoritarian powers, like Iran, have an easier time with hybrid conflicts built on deceptions and falsehoods.

For example, Russian tactics in Crimea and eastern Ukraine in 2014 demonstrated the effectiveness of hybrid warfare in a post-Cold War era. Russia was able to leverage confusion, obfuscation and violence to achieve geopolitical gains.

Iran has its own track record of using hybrid tactics, mostly through the use of its proxy forces in Iraq, Syria, Yemen and elsewhere.

After the American invasion of Iraq in 2003, Iran became adept at striking the United States without provoking a direct response. Tehran’s militia proxy forces regularly fired rockets at American bases in Iraq, and Iran flooded the battlefield with a particularly deadly form of roadside bomb that penetrated some of the best American military armor.

In past decades, though, the United States was much better at thinly veiled, shadow operations. During the Cold War, the United States regularly used unconventional tactics, proxy forces and its intelligence agency to keep adversaries off balance.

The C.I.A. began mining Nicaraguan harbors in 1984: The nominally covert, but well publicized, operations were not aimed at sinking ships. Instead, the agency’s real target was the international insurance markets.

The Reagan administration, which was backing the Contra rebels, hoped raising insurance rates would reduce shipping, raising prices on critical goods and increasing public pressure on the leftist Nicaraguan government.

Reviving America’s old tactics and finding a way to copy Iran’s new ones could be the best way to try to halt Tehran’s current campaign, said Mr. McFate. The defensive measure the United States has taken, including deploying an aircraft carrier and Patriot missile batteries to the region, have not halted Iran’s activities.

“Iran is playing by the new rules, he said, “while we are using the obsolete ones, and wonder why Iran’s behavior is not changing.”