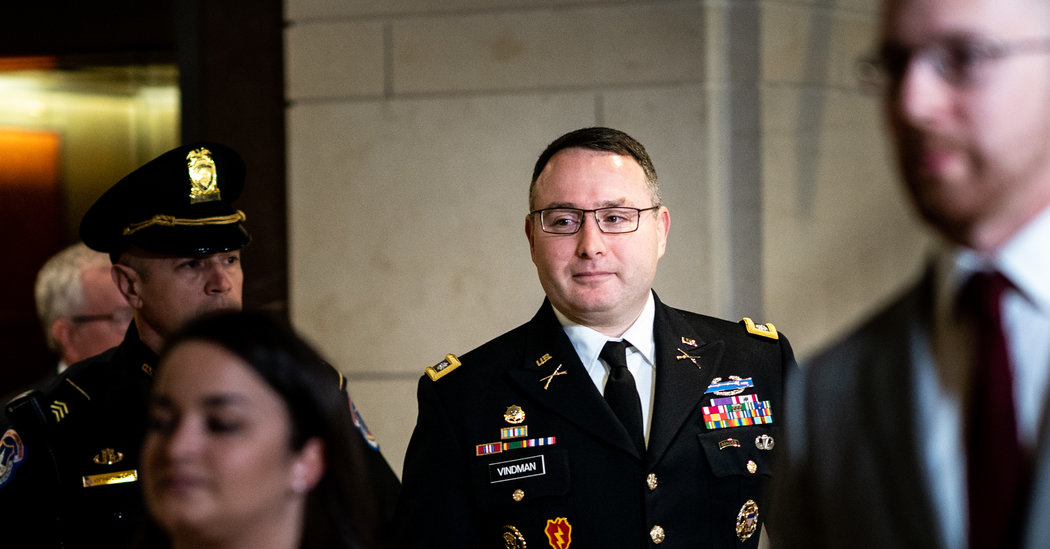 As the top Ukraine expert on the National Security Council, Army Lt. Col. Alexander S. Vindman became so concerned during a July 25 phone call in which President Trump asked Ukraine’s president for help with political investigations that he reported his alarm to a superior.

On Tuesday, Colonel Vindman will testify in the public phase of the impeachment investigation, the first active-duty military officer to do so.

In closed-door testimony last month with the House Intelligence Committee, he described reporting concerns to his superiors on two occasions related to the Ukraine policy of the president and his inner circle, saying he acted out of a “sense of duty.”

He is among the White House officials who have described the fallout as the president and his personal lawyer, Rudolph W. Giuliani, pressured Ukraine to investigate unfounded allegations about former Vice President Joseph R. Biden Jr., a Democratic rival of the president, and to help chase an unproven theory that Ukraine, not Russia, had intervened in the 2016 election. Democrats have accused the president of abusing his official powers to benefit his re-election efforts, while House Republicans argue he did nothing wrong.

The colonel first raised concerns on July 10, when he was among a group of Americans meeting at the White House with Ukrainian officials. The Ukrainians were hoping to secure a meeting with Mr. Trump for the new Ukrainian president, Volodymyr Zelensky.

Another attendee, Gordon D. Sondland, the United States ambassador to the European Union and a prominent Republican donor, “emphasized the importance that Ukraine deliver the investigation into the 2016 elections” and also move forward with a Biden-related inquiry, the colonel testified. He also said that he immediately expressed his concern to Mr. Sondland.

“I, as the representative of the N.S.C., thought it was inappropriate and that we were not going to get involved in investigations,” Colonel Vindman testified, adding, “It was kind of an uncomfortable conversation.”

Later that day, he reported his concerns to the senior lawyer at the National Security Council.

The second episode came shortly after the colonel and other aides listened in as the president held a July 25 call with Mr. Zelensky, in which Mr. Trump pressured the Ukrainian leader to carry out the investigations he sought.

“I did not think it was proper to demand that a foreign government investigate a U.S. citizen,” he testified. “I thought it was troubling and disturbing.”

The colonel is an Iraq war veteran who received a Purple Heart after being injured by a roadside bomb. He immigrated from Ukraine when he was 3 years old with his family, including his twin brother, Yevgeny, who serves on the National Security Council as an ethics lawyer. Like other officials who have been subpoenaed to testify, he has been attacked by the president and his allies.

While the colonel is not the whistle-blower who sparked the impeachment inquiry, he said he did feel compelled to report his concerns within his chain of command. And he matches the description of a possible source given by the whistle-blower in his complaint, in which he refers to White House officials he had spoken to about the call who “were deeply disturbed by what had transpired in the phone call.”

“I am a patriot,” Colonel Vindman testified. “It is my sacred duty and honor to advance and defend our country irrespective of party or politics.”