With Syria on the Table, Erdogan Pays Court to Putin 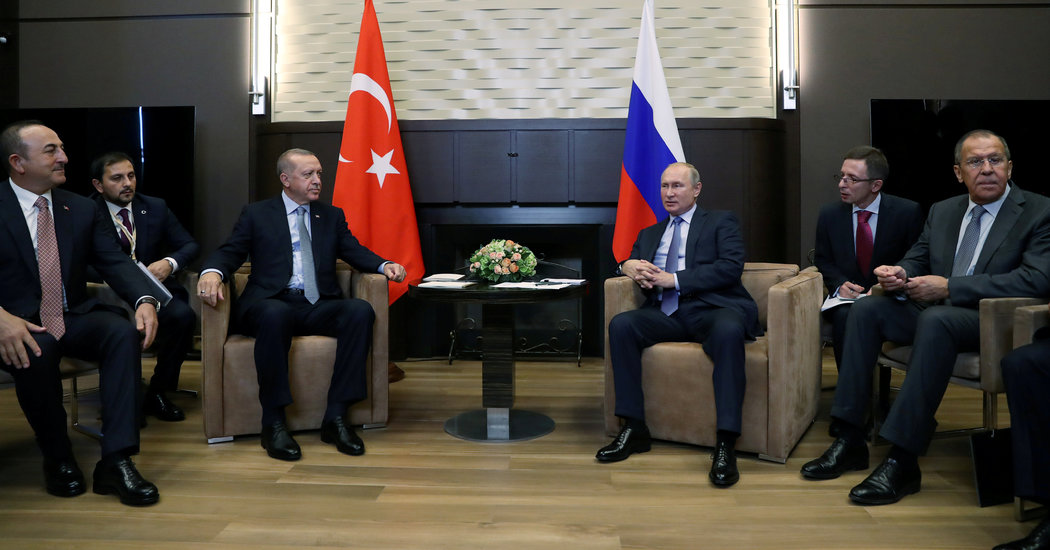 SOCHI, Russia — His jets patrol Syrian skies. His military is expanding operations at the main naval base in Syria. He is forging closer ties to Turkey. He and his Syrian allies are moving into territory being vacated by the United States.

And on Tuesday, President Vladimir V. Putin of Russia played host to President Recep Tayyip Erdogan of Turkey, for talks on how they and other regional players will divide control of Syria, a land devastated by eight years of civil war.

Mr. Putin has emerged as the dominant force in Syria and a major power broker in the broader Middle East — a status showcased by Mr. Erdogan’s hastily arranged trip to the president’s summer home in Sochi. And it looks increasingly clear that Russia, which rescued the government of President Bashar al-Assad of Syria with brutal airstrikes over the last four years, will be the arbiter of the power balance there.

As President Trump questions American alliances and troop deployments around the world, Russia, like China, has been flexing its muscles, eager to fill the power vacuum left by a more isolationist United States. In Syria, both Mr. Putin and Mr. Erdogan see opportunity in Mr. Trump’s sudden withdrawal this month of American forces in the country.

Mr. Erdogan had long wanted to go to war against the Kurdish-led forces that control northeast Syria, but he dared not, as long as the Kurds’ American allies were stationed there, too. He responded to Mr. Trump’s withdrawal by launching an invasion.

Tuesday’s meeting began hours before the end of an American-brokered truce between Turkish and Kurdish forces in Syria, where Mr. Erdogan says his troops have seized more than 900 square miles of territory since invading on Oct. 6.

“The U.S. is still the 500-pound gorilla,” said Howard Eissenstat, a Turkey expert at the Project on Middle East Democracy, a Washington-based research group. “If the U.S. decided that ‘issue X’ was a primary concern to its national security, there would be very little that anybody in the region could do about it.”

But with the United States increasingly removing itself from the picture — as symbolized in the Russian news media by the images of abandoned washing machines and unopened cans of Coca-Cola left behind in the chaotic withdrawal — now it is Russia whose tacit consent Mr. Erdogan needs to consolidate and extend his gains.

“Before, Turkey could play the U.S. against Russia and Russia against the U.S.,” said Sinan Ulgen, chairman of the Center for Economics and Foreign Policy Studies, an Istanbul-based research group. “Now that’s no longer the case, and Russia has shaped up to be Turkey’s only real counterpart in Syria.”

Tuesday’s meeting looked to be a culmination of Mr. Putin’s yearslong strategy of taking advantage of Western divisions to build closer ties with Turkey — a NATO member and long a key United States ally — and to increase Moscow’s influence in the Middle East.

As the United States and Western Europe vacillated in their approach to Syria — to the frustration of Turkey and other Middle Eastern powers — Russia chose to protect its ally, Mr. al-Assad, and stuck with him despite fierce criticism from the West that the Syrian ruler was a brutal despot.

The upshot, Russians now say, is that while their country lacks the West’s economic might, it can be counted on to keep its word.

“Some people are furious again, some people are jealous and some people are drawn to power,” Dmitri Kiselyov, the prominent host of a news program on state-controlled television, told viewers Sunday night. “Whatever the case, Erdogan is flying to Russia to meet with Putin.”

The negotiations highlight the loss of American influence in the days since Mr. Trump ordered troops to withdraw from northeast Syria. The pullout not only cleared the way for Turkey’s assault on American allies, it also prompted the area’s Kurdish leaders to turn to Mr. al-Assad’s government and its main backer, Russia, for protection.

This sudden alliance has allowed Syrian government forces back into parts of northeast Syria that they have not entered in half a decade and thrust Mr. Putin even more prominently into the Syrian affairs.

“The situation in the region is very tense — we understand that,” Mr. Putin said as he began talks with Mr. Erdogan. “I would like to express the hope that the level of Russian-Turkish relations that has been attained recently will play a role in resolving all of the issues that the region has encountered and will help find answers to all questions, even very difficult ones, in the interests of Turkey, Russia, and all countries.”

Russian television showed Mr. Putin looking relaxed as he delivered his opening remarks, leaning back and his hands clasped easily over an armrest. Mr. Erdogan, by contrast, sat up straight as he eyed his Russian counterpart.

Mr. Putin, who relishes chances to drive wedges into Western alliances, has drawn closer to Mr. Erdogan, whose relations with Europe and the United States have been rocky. They have met eight times this year, according to Yuri Ushakov, a Kremlin foreign policy adviser.

In July, Turkey defied Western warnings and began taking delivery of a Russian antiaircraft missile system, prompting the United States to cancel Turkey’s purchase of American-made fighter jets. NATO had warned that the purchase could reveal Western technological secrets to Russia, and that the Russian weapons were incompatible with the alliance’s systems.

Mr. Putin has also cultivated ties to the United States’ closest American ally in the region, Israel, and its bitterest adversary, Iran, another supporter of Mr. al-Assad.

Russia “doesn’t have the economic or military capabilities the U.S. has,” Mr. Eissenstat said, “but it has been very savvy about using its power in limited and effective means.”

Mr. Erdogan and Mr. Putin were expected on Tuesday to discuss whether Turkey will be allowed to expand its sphere of influence beyond the central pocket of formerly Kurdish-held territory that Turkish-led forces have already seized this month.

“With my dear friend Putin, we will discuss the current situation in northern Syria, primarily to the east of the Euphrates,” Mr. Erdogan said to reporters at an airport in Ankara, shortly before departing for Russia.

Kurdish fighters had managed to carve out their own autonomous region in northeast Syria, free of government control, amid the chaos of the eight-year civil war. They greatly expanded their territory from 2015 onward, when they became the principal Syrian partner of an American-led coalition working to defeat militants from the Islamic State militant group, also known as ISIS.

As Kurdish fighters won back ISIS-held land, they took over its governance, eventually establishing control over roughly a quarter of Syria.

Mr. Erdogan’s goal is to create a buffer zone along the entire length of the Turkish-Syrian border, roughly 20 miles deep, to keep Kurdish fighters from getting within mortar range of Turkey. Analysts in Moscow expect Mr. Putin to accept some measure of Turkish control over a buffer zone, though it’s not clear how deep into Syrian territory he would agree for it to extend, or how it would be policed.

Mr. Erdogan views the main Kurdish militia in northeast Syria, known as the Syrian Democratic Forces, as a threat to Turkish national security, since the group is an offshoot of a guerrilla movement that has waged a decades-long insurgency in Turkey.

“We understand Turkey’s concern in connection with the need to ensure its safety and with the need to fight terrorist elements,” the Kremlin spokesman Dmitri S. Peskov told reporters on Tuesday, ahead of the meeting.

“But we are also expecting that all actions should be proportionate to these concerns and that these actions should in no way make the process of peaceful political settlement in Syria more difficult.”

For Mr. Putin, the meeting with Mr. Erdogan provides an opportunity to solidify and extend Mr. al-Assad’s hold on power.

Mr. al-Assad attempted to project his own influence on Tuesday, visiting the northwestern province of Idlib for the first time since the area fell out of government control several years ago. He was pictured near the front line of a battle between rebels and his own military, in photographs released by a state-run news agency.

Before his meeting with Mr. Erdogan was arranged, Mr. Putin was already scheduled to be in Sochi this week to host the leaders of 43 African countries, a first-of-its-kind summit that will offer another measure of Russia’s growing foreign policy ambitions.

Turkey is part of NATO, which Russia sees as an adversary. But ties between Moscow and Ankara have rapidly warmed as a result of the war in Syria and growing tensions between Turkey and its longtime allies in Western Europe and the United States.

As American troops crossed the border from Syria into Iraq this week, the Iraqi government faced questions about whether the withdrawal was camouflage for an American buildup in Iraq. The United States military has a large camp in Erbil, capital of Iraqi Kurdistan, and the troops are going there until arrangements are made for them to move on.

Defense Secretary Mark T. Esper seemed mindful of the Iraqis’ concerns on Monday when he wrote on Twitter, “As we withdraw from NE Syria, we will temporarily reposition those forces in the region outside Syria until they return home.”

The Iraqis had agreed that the Americans could leave Syria through Iraq and then fly out to Kuwait or Doha, according to generals in the Iraqi Joint Command. In a statement, the Joint Command said that it wanted to make clear that “there is an agreement for U.S. troops to enter Iraqi Kurdistan in order to leave Syria, but there is no approval for them to stay in Iraq.”

Earlier this year, Mr. Trump said he wanted troops in Iraq to “watch Iran,” angering Iraqi politicians who said they feared the United States would use Iraq as a launching pad for a war against Iran.