Woman shares husband’s Elf on the Shelf kitchen-wrapping prank: ‘2 hours later and a divorce on the cards’

This might be the most labor-intensive way to ensure you get coal from Santa — or your wife.

Nichola Mullen-King, 36, shared photos of a very involved plan that her husband, Carl, hatched as an Elf on the Shelf prank. According to Nichola, Carl, 24, approached her about wrapping the entire kitchen in gift wrap to trick their 6-year-old son Max into thinking the mischievous elf did it.

Nichola agreed to the stunt. However, according to her Monday post on Facebook, she did not realize what an undertaking it would be.

“My a–h— of a husband came up with the bright idea for us to wrap part of the kitchen for Ef on the Shelf… 2 hours later and a divorce on the cards, it’s done including the fruit, eggs, utensils and chopping board,” she wrote. 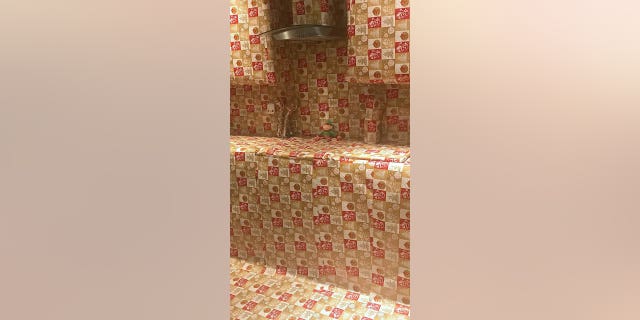 Nichola Mullen-King, 36, shared photos of a very involved plan her husband, Carl, 34, hatched up as an Elf on the Shelf prank. (Caters News Agency)

The U.K. couple’s prank quickly went viral on social media with thousands liking and commenting on the crazy stunt. Several tagged others in comments, suggesting they would like to pull off their own kitchen-wrapping makeover.

“Possible idea?” one person wrote, tagging another in the comment.

“I want someone to be this extra with,” another said.

“This is next level for elf on the shelf,” someone else commented.

The 2 hours-worth of work — including the alleged threats of divorce — were apparently all worth it, though, seeing as Nichola shared with Metro that Max was “absolutely flabbergasted” by the finished display when he came downstairs the next morning. 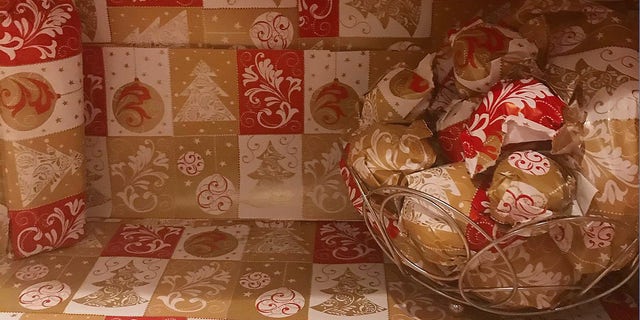 The two hours worth of wrapping included fruit, eggs, utensils and chopping board. (Caters News Agency)

Originally, the boy did not want the Christmas elf to make an appearance this year, as he thought “the elf gets him in trouble with Santa,” Nichola said.

“But he had a last-minute change of heart on Saturday, which prompted Carl to think outside of the box on the spot,” she continued. “I assumed Carl, who is a customer service advisor, was joking when he said let’s wrap the whole kitchen. But after reading Max a book and putting him to bed, he had started and asked me for a hand.”

Nichola said she “couldn’t stop laughing” during the wrapping prank, but she didn’t say if she was still in high spirits during the 40 minutes it took to unwrap everything in the kitchen – including the eggs.

The couple said they will use the paper to wrap gifts this holiday season, so that none of it will go to waste.